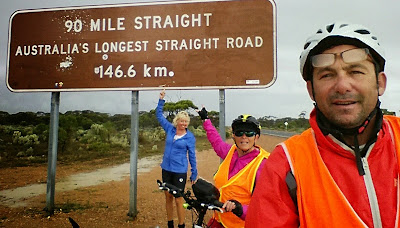 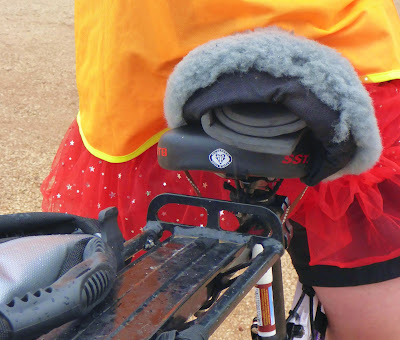 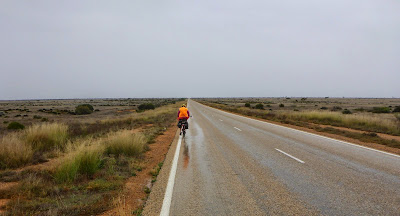 Despite me peeing about four times during the night I survived the Azaria Chamberlain fate. We had been  explicitly warned about possible packs of nocturnal dingos looking not just for babies but we all woke up to a beautiful rainbow and sunrise at 530am without even hearing a single howl.

Marilyn was determined to pack her seat full of foam so as not to get a Megasorarse today as she was intending to ride 100kms of the longest straight road in Australia (Jordan to Dubai is 670miles apparently!). Excitedly we left the campground while Jo was going through the pre-departure checklist for the caravan. It was overcast and drizzling and we soon put on our raincoats.

Quick stop at the official sign indicating the 90 mile straight, a quick stop at the Caiguna blow hole, a cave entrance that blows air out from the extensive Nullarbor limestone cave system, and we were off in a straight line (small ups and downs).

Jo met us about 35kms up the road and later again at about 60kms where she fed us noodles. Next we ran into a lady walking the Nullarbor with a man on a bicycle and a support vehicle with her dog :) Particularly few roadkill along this long straight stretch (not counting the snails I rode over)  but  we did see a lot of car wrecks including an abandoned vehicle with an Arabic note on the dash.

Marilyn wanted to test her battery on this straight, so we carried a fully charged one with us. At full throttle I made the usual (impressive) 70kms before changing and Marilyn did 80 before changing to a fresh one. By then I was cold as following Marilyn on her last charge was slow going for me with a spritely new battery. And then later with a fresh battery Marilyn had the advantage on me requiring me to put in a good pedaling effort to keep up (a fresh battery zooms along)!

We stop at the only two resting areas 65kms apart and no sign of Jo. Instead of getting cold we decide to push on on the last remaining battery charge  to stay warm. Eventually Jo finds us, surprised we'd gone this far!

Marilyn decided to continue her marathon effort and finished the 90 miles and continued on to the Balladonia Road House, located in the Western Woodlands (end of Nullarbor). Enormous downpours along the way, we were wet, cold and sore at the end. Marilyn got her leg caught in bike cables on her final dismount at the caravan and fell over. Jo had made spaghetti and got us a nice WA wine and was waiting for us all set up. It was a dramatic day of 182kms still at a 25k average! Wow, what a way to cross the Nullarbor :). Thank you ProElectric for the Aseako bikes!

Tomorrow another 191kms to the end of the A1, to Norseman! There we can get water and food again. Some roadhouses on the Nullarbor even collect water from air-conditioning units, and certainly none is available to connect to caravans. Roadhouses sell Timtams, beer and meals, but even lip gloss was not available. Certainly no veggies or other regular shop items.

After Norseman we think it might be easy street with phone and Internet for me (thanks Telstra for not giving ALDImobile customers coverage along this major highway section of 1000+ kms)!