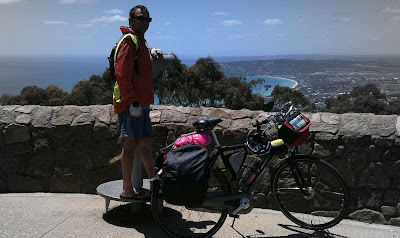 Waking up in a great campsite is wonderful. Fresh air, sounds of birds, camp coffee,.. why leave Franklin,... And so in good spirits I headed up Arthurs Seat, 20 kilometers along a scenic road gently winding its way up to the 305 meter high lookout. The day was warm and sunny with a friendly hint of a tailwind. After I whispered a few words to friendly horses in a paddock along the road I discovered I had a flat tyre. It was the third puncture on the same patch! Nothing sharp was spotted except a tiny blemish. This time I also patched the inside of the tyre.

Views looking down onto Mornington Peninsula were stunning from the top (see picture). But hungry for lunch I headed down to Dromana where I was expected for lunch at the renowned Fork to Fork restaurant. Flying down the road I came across a few intersections, but on my map it seemed I just had to follow the main road down. When I finally came to an intersection with confusing road signs I actually checked the map and realised I was heading down the mountain in a wrong direction somehow. Many extra miles and several hills later I came close to where I had to be, except I was on a freeway and if only I could turn right 100 meters I would be there...

Alas, La Trobe Parade, where I had to be was a fly-over bridge and there was no getting off the freeway here. I had to backtrack a fair way to an exit and by the time I reached La Trobe parade again but it looked like I still had a fair way to go uphill. Blood sugar level and energy were way down, it was 3pm. In a cranky mood I locked up the bike, called Ree and got a lift for the final 300 meters up the hill. The food was magnificent and I was fully recharged within the hour. The restaurant made a fair donation to my cause as well, which was incredibly thoughtful. Thank you Fork to Fork.

At 4pm I left for our final campsite for the trip, the Big4 at Frankston. Cycling below Mount Martha along the blue seas and white beaches of Mornington was excellent, winds still reasonably favourable too. But then I got onto the highway. Obviously getting closer to Melbourne now, lots of peak hour traffic. Very noisy and smelly cycling along the busy road. Not so good. Not so good at all when I got a flat tyre again! This time the European valve on the tube also broke. I had no tools to take the Dutch wheel off, to change the tube I actually need to take the gear and brake cable off too, clumsy arrangement. I called Ree and got rescued. She too was frustrated in the traffic and was not happy to be so close to the big smoke of Melbourne. Together we arrived at the Big4 Holiday Village in Frankston at 730pm where we were well received by Jake before setting up our tent for the last time.