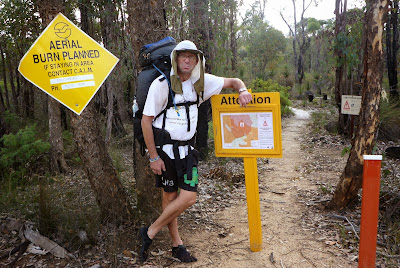 It was a cold morning again at the White Horse shelter.  I sleep in my silk lining and am pretty warm at night unless I get up to pee... Fortunately that is only once or twice per night. Marilyn manages most nights without a pit stop, not sure how she does ír. Must be the twelve hot drinks  I have at night, green ginger teas and soups.

Phil was there as expected, but we were also joined by two young women, hiking South. Sheridan and Sarah I believe they were. Sarah was very well traveled and had hiked and camped in Africa and Asia, with stories to match. Sheridan has chronic fatigue and hyperchromalgia, and deals with chronic pain. She is a brave woman for whom I have a great deal of respect. Most in her situation would be sore and suffering at home, but she is out here living life!  She set up a tent in the shelter (with veneer backrests against wall too) as a trial, but had a lot of condensation overnight which made her sleeping bag wet. It did not dampen her mood, and the two women left shortly before us at 830am. Phil was long gone, he gets up early and listens to the weather forecast on his radio, gets ready and goes :)

Today we hike over a mountain along the Bibbulmun to Gringer Campsite and go a kilometer and a half further along a spur trail to the Threeway roadhouse to the caravan! Phil took off before us and we expected to see him in the hut.

Along the way we went up to a Mountain which had a spur trail to the top. We decided against the extra hike as the high rock ahead looked like a fair extra effort.
We crossed the Albany highway and found Gringer hut, but no Phil. The log book mentioned mice and we were glad to go the the Roadhouse. 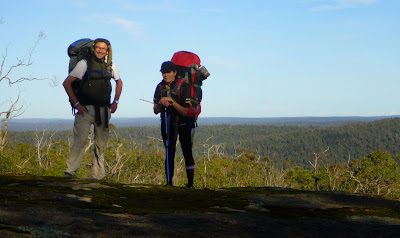 Back at the caravan we restocked, did laundry, had a beer and potato wedges. Caught up on internet and  had fish and chips for dinner. We stayed in the backpackers quarter in proper beds with clean bedding!

Radio interview in the morning! Was great to get some publicity! Sharon had tipped us off, a friend who is coming soon to join us for a few days!

We were worried about Phil not having arrived at Gringer's before us but assumed he'd gone up Boonara Hill, the mountain along the way. When we saw his entry in the hut book in the morning  as we passed it on the way to Nerang campsite.

Our walk to Nerang was nice and flat and fairly uneventful. We saw the black cockatoos with the white tails today, mostly we have seen the red ones. Apparently the red ones are endangered, even though they are the ones shouting at us along the track for weeks now. Kookaburras have also been laughing at us morning and night, they are very vocal and very abundant!

At Nerang hut we found Phil. He had indeed climbed the mountain, albeit unknowingly. The spur trail is almost more trodden then the regular track and he had accidentally taken it. Once on top you were meant to go back the same way, but Phil thought he was on trail but couldn't find the continuing track on top. He had also hit his head along the way which didn't help the situation. An hour later he retraced his steps and 300m back found the junction and realized his mistake.

To add to Phil's demise he ended up at Gringer hut where at 8pm a dozen or more (19?) scouts woke him up with torches. They stacked his carefully collected and chopped jarrah firewood onto the fire (Phil is planning to walk back and was hoping the wood would be there in two days time still). He got up and socialized. In the morning he found a couple of young ones trying to light the fire and they asked if he could do it. He showed them how and once it was going they promptly left. No entry in the log book either!

It was a short flat walk for us past Gringer hut to get to Nerang hut where we found Phil, chopping wood. Soon we were joined  by 5 mates who have an annual Bib hike. They provided good value for the night showing off awesome gear (ExPed mattresses etc) and cooking skills supplemented with Port.

The toilet here is sponsored by life member John Forster, I wonder if he is our Tasmanian wood chopper!