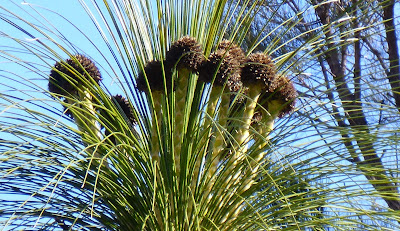 That's right, we followed a diversion for a 2015 prescribed back burn! But first let's mention or walk to mount Cook from our cozy Nerang shelter.

The scouts had passed the hut and said hello and we followed on their heels about 9am. We soon overtook them as they have little tutorials along the way. Slowly we started heading up mount Cooke, getting steeper and steeper and then around the 450m mark we started walking along rock surfaces following rock cairns to what we perceived to be the top. Just after the top we found an exposed rock face for lunch and phone reception!

This is when the scouts passed us and surprisingly other people started walking past! After lunch we descended a little and went up again onto a little treed hump. That bushy hump turned out to be the actual summit. By now it was apparent that it was Sunday afternoon and this mountain a popular walk! I was busy doing PR work all the way to the hut, handing out cards and flyers that we carry.

At the hut we found two hikers, Lester and James. Actually James was walking to the top, as Lester was tending to a blister. Marilyn, who had earlier almost stepped on a snake and at least once toppled backwards when trying to pee without dismounting her pack... gave Lester a hand dressing his blister. She was promptly offered a matrimonial option. She wisely declined.

James and Lester were our sole camp buddies for the afternoon and evening, after the tourists dried up. As we were in phone range we were both busy catching up on duties and planning the next caravan rendezvous logistics with the kind people involved including my partner Ree who flew into Perth and who will join us soon!
A casual start to our day today and we strolled to Monadnocks campsite. As we were told there was a clearly marked diversion and we had no trouble following it, though we missed out on climbing up Mount Cuthbert and Mount Vincent, no great loss :)
It was just a fire trail so it was an easy 13-14kms. We noticed our first garbage dumped along the track. Signs of civilisation apparently. The Monadnocks shelter was leafy and quite with noone there. Apparently our last phone reception for a while, so last chance to firm up caravan and visitor plans!