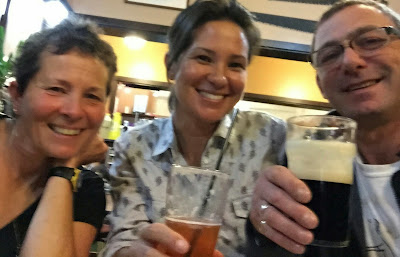 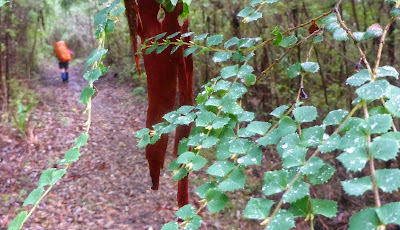 We lost Eleanor in Pemberton as she caught the 6am bus to Busselton. We had shared a nice pub meal which included a pint of Guinness starter and a bottle of the best big red that Pemberton had to offer.  This town really rocks, and I say this because they sell and eat local foods, which included Pemberton trout.

On our rest day we raided the local IGA and visited an organic whole foods shop. Not intending to buy anything I walked in for a look. How could  i resist... Marilyn and I both bought more than we could carry.

We also bought a large tube of glue to try fix my shoes. The hopefully fixed shoe is now glued and drying in the caravan for the next week.

In the morning Greg, who met us at Boat Harbour hut found us on the campsite and we had a nice chat. This led to him being persuaded to help relocate the caravan to Donnelly River  which I had been told was 30 odd kms away. Greg and I left the campsite and drove over an hour... Turned out it was 95kms away (using sealed roads) and same back. Lots of back burning happening where we drove, lots of rain, it got dark and we were out of phone reception :)

Greg is bussing to Collie and is walking back to Pemberton, a long hike.

The following day we left at about 8am for the 25km day. We had plenty of rain as we walked up and down through forests, past Brook dam and an arboretum. Had lunch under a scant ray of sun but eventually got flushed  out by rain again. Soaked and exhausted we arrived at Beedelup Campsite shortly after 4pm, 27km later. We had to walk back at one point when we hadn't seen the Waigi signs for a while and my GPS was still pointing to the wrong destination. This explained the extra 2kms.