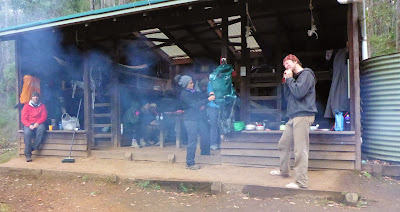 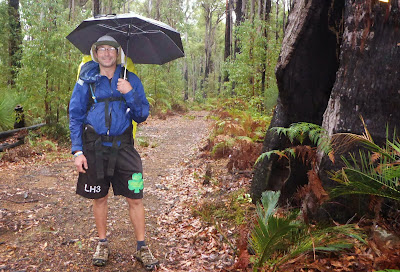 On Friday morning Marilyn and I had a leisurely morning waiting for Chris who was due to pick us up around 1030am. Chris and wife Shanomi arrived and we all drove to Drivers Road, a long way away along many little dirt roads.

Half past noon we headed on our merry way along the Bibbulmun and despite the forecast stayed dry for the 16 or so kilometers along the Murray River to Murray's shelter.  We were afraid we might get there after dark, but comfortably made it. At the hut we found the BBQ ring did not have a grill plate on it, which we wanted because Chris had brought along three steaks! As he lit the fire Marilyn discovered two bottles of wine in the shelters box!

We've found titbits in it before ranging from gas canisters to candles, but never wine! Bonus :)

Marilyn sharpened some sticks and soaked them to act as skewers for steak. Steaks were turned into pieces and we barbecued them successfully on Chris's fire. Dinner was supplemented by rehydrated chorizo and beans from Ree.

Off cuts of meat were tied to Marilyn's shoestring and dunked in the Murray river in the hope of attracting some marrons (WA crayfish) which she had never seen before. No luck there, but she was lucky to find her laces back in the river.

Next morning, as through  the night, it rained all morning so I got my umbrella out (which I had brought due to the terrible forecast of 50+mls rain/day) to go over my torn up raincoat (it has known better days but just recently started falling apart). We stopped for snacks in a hollow tree but the rain fortunately stopped in time for lunch. Chris had a brand spanking new picnic rug which we christened. Sitting amongst the mushrooms growing on the firetrail. Marilyn pulled out salami, tomatoes and sourdough bread fir the occasion.

Straight after lunch as we headed up the steep hill we found several log benches to sit on, complete with distance info from huts. We had not seen seats since we left the coast! One was next to a hollowed out tree called the Yarrabi Hilton.

Reasonably on schedule, 330pm, we walked into Swamp Oak campsite to find Annie's birthday party; a group of 7 lovely women celebrating Annie's 50th. Also there was Ashley and Elaine, a friendly couple out for an overnighter. Never had we seen such a crowd, and given the forecast and the log books it was an amazing coincidence to have us all get there the same night. We all worked as a team and managed to fit in.

Though Ashley and Elaine had a tent, there was a space arranged for them in the hut as the forecast was miserable. It rained heavily most of the night but they were comfy and warm in their tent :)

Did I mention Chris cooked again? He'd brought 500gms of mince and made a concoction for us... This was very unfair as Marilyn and I were left carrying our dehydrated extra food (we had also catered for chris just in case :)

Come breakfast time the rain did not stop the 7 women from leaving as they had husbands waiting for them in the Dwelingup pup which stopped serving lunch at 2pm!

The three of us left quite a bit later and walked through heavy rain along the track and missed one turn off. Instead of back tracking I used the GPS to guide us to a firetrail intersection where we found the women having a pee break. We joined them. We might have cut a little off with our mistake.

We beat them into the pup as the rain pretty much made us run. I tried to get Chris and Marilyn to stop for lunch on the Bibbulmun 10minutes from town but they were hell bent on pup food. And yes, the rain was still pouring down on us...
Drenched we made the pup and told the nervous men and children their women were on their way. We had a lovely pizza lunch which I woofed down with a few pints of Guinness. When Amber and boyfriend arrived many hours later to take Chris away we were almost completely dry again.

I lost my new hanky already..
Nice to be back in the caravan!

We will relax tomorrow and plan the next stage.