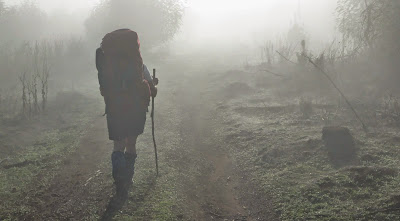 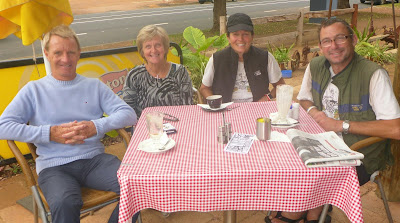 We headed out the Gregory Brook hut with its black water early in the morning after a peaceful night without getting raided as I bribed the resident mice with a small piece of mountain bread which was extensively nibbled around the edges in the morning. I also started burning some lemon scented tea light candles at night which I think keeps them at bay.

Today was going to be a slightly long day as we were heading on a diversion to Wright's Bridge camping site where there is no hut because the bridge to Blackwood campsite is under construction. Though the fires that burned it were three years ago the bridge was ordered from France apparently and that doesn't happen overnight. There are probably other good reasons for the diversion but we were told that if you follow the Bibb signs you will end up at Wright's Bridge.

Eventually we came to a sign about the diversion complete with map and we glanced at it and continued following the Serpentine Bibbulmun triangles. Shortly after the sign we noted a red cap discarded on the RHS of the track and low and behold we see the track and a Bibb arrow. Would've been easily missed. No ribbon or sign and we assumed we were on track for Wright's Bridge still. Turned out we turned into the original track and ended up at the bridge construction site. Just before we got there we ran into a Tassie hiker called Roy from Hobart who confirmed we were heading for Blackwood and were not on the diversion but that all was well with the bridge crossing as the workmen were friendly.
Soon after seeing Roy we ended up at the bridge construction site where we were escorted across at a safe time and offered coffee in their rest room where they even had a mobile phone repeater so we could use our mobiles! We had a quick lunch and called our loved ones, posted a blog entry, and contacted a TV journalist wishing to get in touch with us!

Along the river we continued, up a steep hill and we arrived at the Blackwood Shelter. We even had phone reception there!

Night was comfortable, and valley below was covered in a blanket of clouds when we woke up. A beautiful spot.

As the fog rose to get us we left and went down towards Balingup to find our caravan. The fog was pretty special.
Trail was well marked but fire damage was pretty evident all around us. The burned homestead, and some burned trail signs (many with a new one next to it). It was shortly after lunch we ran into Dennis and Karen who had kindly dropped the caravan off and were walking up the track from Balingup to greet us.

Iced coffee at a café and a nice chat before they returned home to Dunsborough. Special thanks to them for doing that for us!
The caravan is now parked alongside the cricket ground and next to a river, plugged in and warm for the next two nights. Chris and Shanomi visiting from pretty tomorrow!