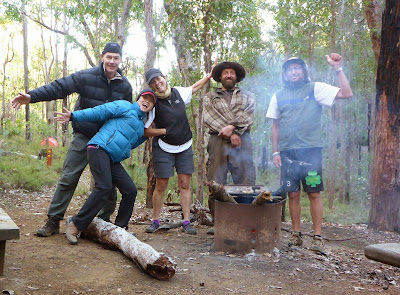 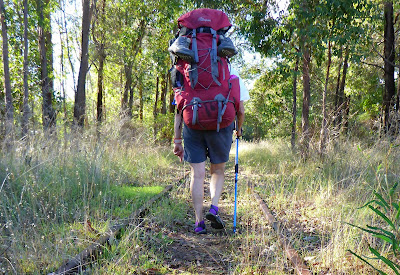 We left our dusty Grimwade hut nice and early and walked North... Well, we were meant to be heading north, bit the track decided differently. Though the first we were walking through appeared innocent enough (no steep gullies etc) it wound around in mysterious ways even avoiding convenient connecting dirt roads. If anyone knows why the track sometimes seems to go out if its way for no apparent reason we would love to be enlightened. When I showed the map to Marilyn she said she'd take the map next time and make sure we don't miss shortcuts like some of these obvious ones as her feet are sore and tired! The forest all looks a bit the same these days! Today I lost my hanky, second one so far this hike.

We are still seeing lots of emu poos, and they are firming up... Also we are finding these big undigested nuts in there which we cannot pinpoint to any tree. I busted one open and found white pasty stuff inside which didn't have much taste, though looked edible... If you don't mind eating emu poo nuts that is.

We got to Noggerup shelter and found three people there. Gadget NZ man Muz and nurse Ann now both from Perth. Muz sported a Garmin GPS watch and some other nifty gear. He had an Ortlieb backpack for instance, something I'd never seen before, and one of those incredibly wonderful plastic solar light pillow Lumen gadgets. Of course he cooked with an MSR whisperlite stove and anodised steel pots for which he had backpacker dehydrated meals.  I would've gladly traded some equipment! They were just on a short overnight hike - how nice would it be to be home now...

And then on the other side of the scale we had Dutchman Martin van der Aarde, dutch for Martin from this Earth. He was indeed a Dutchman on vacation, and despite initial looks is from this earth. He also tried tasting the emu nuts incidentally. Must be a dutch thing... His intention had been to find a job as a cook on a remote station, a good change after working in mental health in Holland. But since that didn't work out he thought he'd hike a bit on the Bibbulmun!

Now humanist Martin likes to keep things simple, so that meant minimalistic. His sleeping bag was a woolen blanket for instance and his preferred hiking shoes, wearing a little thin already, the Crocs. He cooked on campfires and made damper on site, boiled rice and noodles and mostly stuck to a vegetarian menu. Well educated and fluent in English he kept us all entertained with his minimalist travel adventures which included skirting the Russian border in the arctic and being kicked out of Poland.

After everyone went to bed I stayed up yacking away in Dutch with him. In the morning he showed me his dutch Annie Schmidt book, full of amazing children nursery rhymes - which may seem odd to you, but that just means you don't know Annie Schmidt and probably don't speak Dutch!  Hope our paths criss again some time.

So in the morning we took a group photo as we enjoyed each other's company so much and headed off our separate ways.

Marilyn and I bee lined to the Mumbalup tavern 7kms away. There was an undocumented diversion here of one kilometer as one hiker had a run in with a landowner who now no longer allows the Bibbulmun to cross his land! A kind road worker along the detour donated $20 to Cystic Fibrosis as we passed and Marilyn dug out a few railway nails from the old disused railway that we walked along. The nails had her son's initial on them J. I waited at the closed tavern where I boiled a billy for us.

It was shortly after 230pm when we pulled into camp Noggerup, only ones there. Lovey hut with shiny veneer boards. Though no tanbark on the ground it is nowhere near as dusty as Grimwade!

We are figuring out caravan logistics for the next week or two, but after that it is going to be very tricky wrt finding a place to meet our caravan. It is going to be a bit of a juggle after Gringer creek... Anyways as we get closer we tend to find solutions!

Good chance that mate Chris is going to hike with us on the weekend! Yeah!