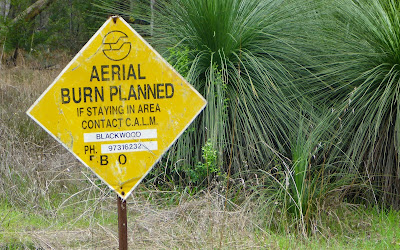 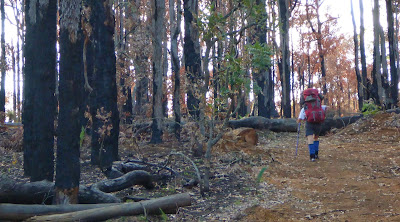 Chris and Shanomi drove over from Perth to spend a day with us on our restday this Saturday in Balingup. Balingup is a quaint little tourist town where they had an arts and crafts market happening. I bought some local honey which I paid for but forgot to take from the stall :( We tried to have lunch in one of the cafes but after a ten minute wait for the table it turned out they had run out of food in any case! Ended up in the nice tavern down the road where we were enchanted by the chili burgers!!

Chris and Shanomi were kind enough to take our caravan to Collie on their way home, our next destination, and the Post house Backpackers at the Balingup post office (surprise!) offered us a very kind rate to stay in a room there. Shanomi saw or back packs and suddenly realized we weren't just on an afternoon hike. She had conveniently forgotten about having to lug 23kg backpacks with us... Renewed respect :)

Eight on Sunday morning, mother's day,  we were heading up the hills on the Bib again! A quick photo at Walter street on the way out :) Not named after me incidentally.

Trail was good, with a few challenges both vertical and signposting wise, met one young hiker coming the other way just after lunch, I lost my thongs of my backpack, and we arrived 4pm after almost 25kms of ups and downs at Grimwade hut. And grim it is. Signs of recent bushfires, tons of dust everywhere... and I miss my thongs :(

Interestingly we saw several signs indicating aerial back burning! No dates posted, but we kept a cautious eye on the sky just in case fire bombing was happening. Despite no accrual fire bans in force the fire ring at the hut has an undated notice to say No Fires and Fire Ban, but we don't normally light them anyways..

In the other huts we found down South we never had dust problems as they had wood chips on the floor. What a massive difference that makes!

Anyways, another big day again tomorrow... Geez I'll miss my thongs till we get to Collie on Wednesday afternoon :)