One thing leads to another...

It was drizzly at 7am as we prepared to leave our Albergue in Agès when I realised my medicine was locked in the Albergue fridge. No one who works at the Albergue was around, as Friday night was a drinking night for the locals (keeping us pilgrims up). After a few frustrating minutes trying to call the phone  number and pacing around the place wringing my hands I eventually popped the padlock of the fridge to discover my medicine bag wasn't in there... It was in the little fridge next to it, which was not locked... 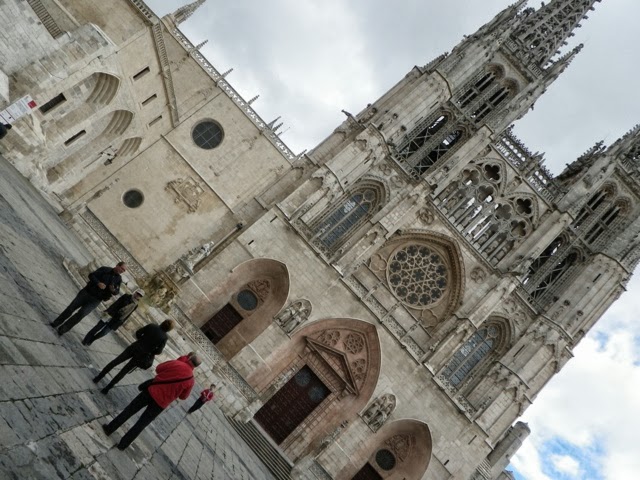 So we finally left about 715am in a drizzle. The first cafe where we took shelter provided us with coffee, but their food was slow to come and it was crowded due to the rain. Some of us purchased some fruit and coffee and decided to go to the next town. The rain looked liked it had stopped but it got worse as i climbed up some long slow hills losing the team. There were a few unclear intersections where I thought I took the most obvious direction.
The next village I came to had one cafe, according to what people were telling me. The next town was only a couple of clicks further. The team was not to be seen here. I changed into proper rain gear and finished my fruit, assuming the rest of us would be lunching in the next town. On the way I noticed a little bar with locals, but no peregrine backpacks there. Heidi from Denmark walked with me, till I had to get out of my wet weather gear as the sun came out again (umbrellas I swear  scare the rain clouds away). Then Annie from Belgium  walked with me, as my sugar levels got lower I lost them all. I ate my nuts supply and other bits and pieces, but I needed to have lunch! Prompto! 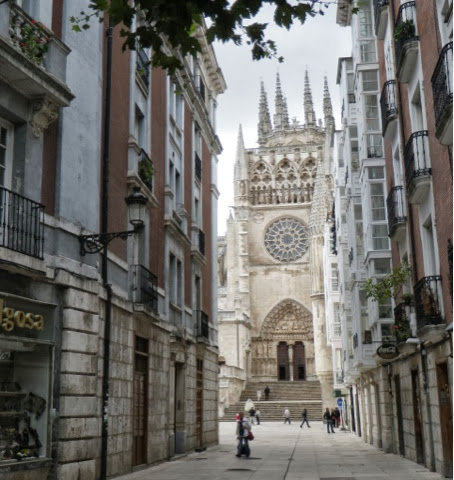 Then I passed the airport and saw a little village past it, where I could have something to eat. The Camino took me in the wrong direction and I decided to walk back and into that little place. Three Irish ladies (notice there are all women on this Camino, and a serious lack of men somehow) also got off the trail, also needing lunch. There was little to no choice, and learning of my diabetic issue they promptly fed me home made energy chocolate bar and a banana and explained they were told to follow the river and keep it to their right. My phone led us to the river but there was no path to follow there, so we backtracked back on the Camino and along the highway into the industrial part of Burgos.
We passed a cycle path and walkway along the river which my map clearly said took us straight into town, but the Camino seemed to point the other way. We followed it till the Irish and myself all collapsed  into the same café. I stood at the bar trembling with low sugar levels and was refused service (just how things work in Spain). The ladies got served (slowly), other people coming to the bar were too, but not me. In the end I yelled for Coffee con Leche and pointed wildly at the tapas dishes under glass. The barman gave me a rude look but eventually realised something was up. Even after giving me my coffee and sandwich he was trying to figure out what else I needed. Still unable to even conjure up a Spanish postcard with my CF story I repeated Gracias a few times and gave the thumbs up to the now concerned man.
In the mean time Kathleen who had been in Burgos for a week texted me from her Spanish phone to say the girls had 'arrived' and i should contact them. I had no idea if they had arrived at the location where we had to pick up the key to the apartment, the actual apartment which was a taxi ride away at an unknown location, or whether they were in Burgos having sangria with Kath and Carlene. My texts to the team went unanswered. Turns out they weren't receiving my texts, but in the end we found each other after I got a shower at Kath and Carlene's hotel.
Of all days this was our most frustrating one. The team had waited for me for half an hour at the cafe without pilgrims. Rebecca hadn't received the text from my new Spanish number, which I had texted her the day before - assuming she got it as I heard an electronic bleep in the Alberge after I send it and we'd forgotten about checking it...
We had a couple of nights, one full day, in Burgos and saw the massive cathedral and lots of cool brass statues and other things. No massages on Sunday (I've been so hanging out for them and apart from seeing them advertised occasionally just can't seem to get them happening), no shopping on Sundays, no dinner before 8pm,... All the usual Spanish things. Bars close for siestas when the bar staff has to find a way to amuse themselves for three hours which is not enough for them to go home, nor are the shops open for them to do any shopping... Us peregrines find another bar, eat more tapas and drink more gin and tonics - which come in vase size glasses at moderate prices and outrageous amounts of alcohol - and sangria which is made from ingredients that don't look appealing (sugar, soft drink, rum,...) but which tastes fantastic with lots of ice.
And so we survived another rest day. Bonus for this rest day was finding Sarah currently from Melbourne who just swapped from the Northern Camino to our Jacobean Camino, the Way of St James, or the way of CF as we call it. We may have to adopt her into the extended peregrine family. Most o four extended family had a nice peregrine meal for the usual €10 complete with rare hamburger and bony fish, seriously delicious with the plate of salad and ample red wine which doesn't give us hangovers either. One miracle of this pilgrimage is the lack of hangovers, and the surprising lack of drunk and vomiting crowds that you'd expect with never ending wine supplies.
Can't wait to leave the big smoke behind though and go to the nice small villages where life is simpler. My sugar levels are better again and I'm boosting the vitamins as I feel I'm coming down with something.

Not happy Wally, don't go anywhere near roads when you're low on sugar, buy more snacks, eat when you have to, this is all so frustrating!!!!!
If you're coming down with something just hole up somewhere nice for a couple of days & catch up with the others later on!!!!