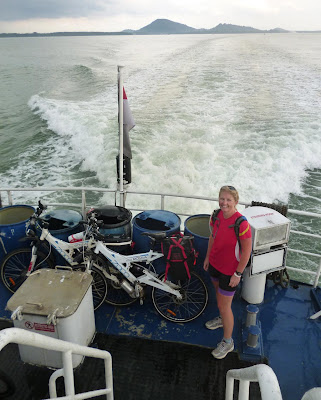 Leaving Malaysia behind. Note the black cloud, which had just emptied its contents on us


Unless we manage to stuff up on a truly massive scale tomorrow, the team has completed its final ferry crossing. We have crept into Singapore under the radar, as it were, and are lurking at the eastern tip of the island, girding our loins for our final ride across town to the Dutch Club tomorrow.

We have bade farewell to Mark, who had to fly out today. He left Desaru before dawn to cycle the last 30km and catch the 8.30 ferry and as far as we know, got himself and his trusty Apollo safely on the flight home. Post a reply, Mark, and tell us how you got on. 5000km without a battery is quite a feat - please give yourself a few days off before you start climbing the hills of the ACT again.

The rest of the team trundled along in his wake as we only had to catch the 4pm boat. Ree was in charge of the bags - what a way to spend your birthday - so one of our daily headaches was obsolete. As the taxi passed us en route she even jumped out with cold drinks!

We found out at this late stage that when Walter says there are no hills, he means no hills compared to Tassie. This explains a lot. There were hills today, and miles and miles of oil palms, but we left all in our wake. It rained. We got wet. It stopped. We dried off. At the ferry port it rained again, and a girl with an umbrella bravely tried to shelter each of us in turn as we trundled either a bike or a trolley full of bags onto the boat, and the boat boys helped us manhandle the bikes up steps. The team comprised 5/8 of the passenger list, so there was not a crush at customs - we were through in a flash, put Ree and the long suffering luggage in a taxi and rode a short way to Changi Village hotel where the bikes were ceremoniously wheeled through reception to the baggage room for a well-earned rest.

Bravo to all of you!
To Karina to keep up with all the boys in such a marvelous way!
To Al, for caring well after Wally & writing terrific reports!
To Mark for his special contribution to the whole team for the entire trip of 5000 km! Sorry that you left 2 days too early and missed the celebration at the finish!
To Mirjam to join the team and showing exceptional stamina & endurance!
Last but not least to Wally for his admirable perseverance to keep it up all the way!!!
To Gido, Peter Andrew and Ree for their support & encouragement on the last day to the Great Finish!!
And to the many friends who joined during the 2 months ride for several weeks!
Bravo!Bravo!Bravo!To ALL OF YOU!!!

The early morning was crisp, quiet and clear, the road uncluttered and smooth, motivation high; panniers secured, the 30 kilometres from Dessau to the ferry terminal disappeared under the wheels at speed. Arrival at Malaysian Immigration gate with enormous time to spare, I miss seeing my kids; no customs officer, I’ll wait. And wait... and wait... umm. Two other tourists have appeared.

The ferry will leave soon so I ask at the tourist office. “You will process my passport, yes I can get the other passports”; “and you will give them back to us at the customs counter”.

I wait... and wait... umm. I walk into the tourist office opening the door and wandering about. She is sitting and drinking coffee with others. She jumps to her feet in surprise having forgotten. She gives me three passports; I sprint out the door stuffing (unstamped) passports into my jersey pocket. I hope one is mine.

The other two passport holders are jogging to the ferry, its motor running. The Apollo’s handlebars creak under the acceleration and extra load, the bike at road speed down the jetty and stopping on the gang plank being pulled in. Made it.