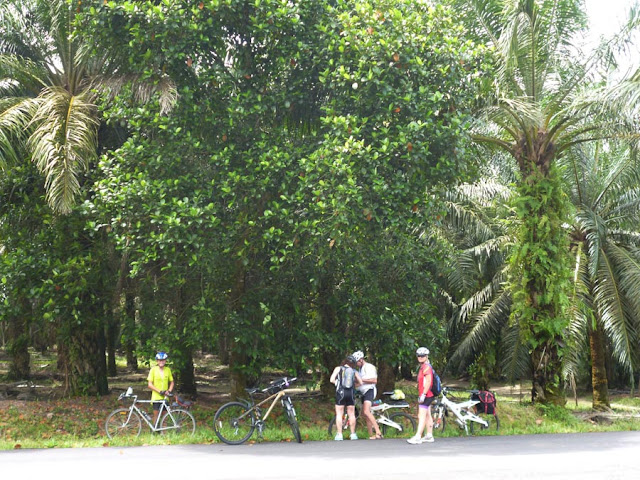 Munchie stop in the endless oil palm estate, necessitated by the dearth of coffee shops.


The team survived the night in the rather strange Felda house and a taxi arrived, along with the house owner, on the dot of 8.30 as arranged. Bags were loaded and taxi man instructed, and one person, Al as it turned out, had to go with the taxi as far as the police hut where the bikes were left. There were two versions of what was supposed to happen next - Taxi drops Al at hut, continues with bags to Desaru, and the rest come in the owner's car, or taxi drops Al and bags at hut, returns for the others, takes them to hut where bags are put back into taxi, which goes off to Desaru. Reality fell down the gap between the two theories, as Al sent taxi off to Desaru, but taxi in fact drove back to the house, where the others thought he was an idiot for bringing the bags back. So then he was sent off to Desaru again and the owner found a car to take the rest of the team to the police hut, where we saddled up and rode a full 120 metres to breakfast.

The other thing that we had learned from two sources - Wal from the gps and Al from his policeman friends - was that contrary to our earlier research there was a coast road that we might take rather than the highway. So we did, despite dire warnings of potholes and total lack of amenities. The potholes were nothing to Vietnam vets like ourselves, and the lack of amenities doomsayers had forgotten about a whole decent-sized town halfway down which was fine for lunch. Coffee stops were, admittedly, few and far between, and we rode through miles and miles of oil palms and it was a bit hilly and it rained quite a bit... but it was good!

And so we made it to the rather astonishing McDisney resort called the Lotus Desaru, which is so big it has shuttle buses to take you from room to reception to restaurant, and has huge blocks of rooms called A and B and C etc which are each a different pastel shade to prevent you getting lost, but we still got lost. It doesn't seem to be bustling with people though.

It was great for Raja Wali to be reunited with Ree after 2 months. She came over from Tas laden with local goodies for our arrival snacks, which was easily the best welcome we have had in the more than 50 hotels we have sampled in the last two months. And today is her birthday.

Happy birthday Ree!
This adventure should be called Coughing4Taxi. Riding with CF seems the easy part.Have you considered other accommodation strategies, such as a portaloo on a moped and a tee pee on a motor bike, or just roping you all together and getting Mark to pull you along overnight? Perhaps you could raft your way down the coast,pedalling doggedly.