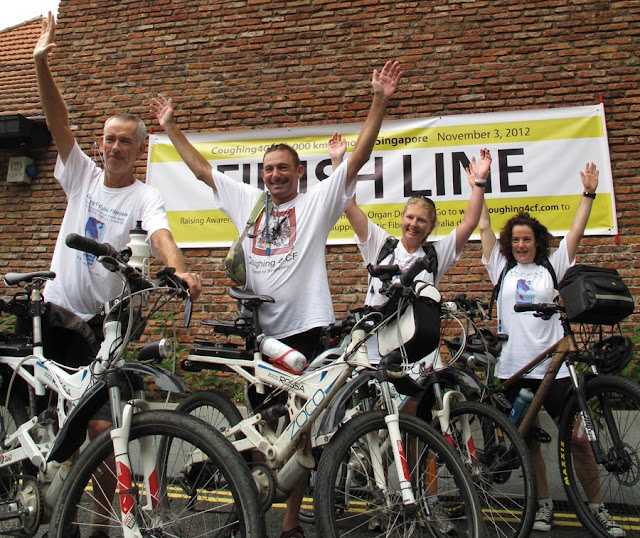 And so we trundled up our final slope - rather a steep one as it happened - to the Hollandse Club and a bunch of cheering, clapping people! Our thanks to Chris and Ineke for all their hard work in laying on the arrival party which was lovely.

We were chaperoned for the last 30something km by sherpah Peter and sherpah Gido (the latter further increasing the team's van Praag concentration) who led us along a terrific bike path for much of the way with only the last leg weaving our way through lanes of Singapore traffic. Naturally it rained pretty hard for a while, but at least we had time to dry out a bit before arriving, and a change into brand new CF t-shirts just around the corner from the club (good thinking, KD) meant we did not arrive in quite the dishevelled state in which we (well, Wal and Al at least) had spent the preceding 5110km.

And so we are here. WVP, with the GA constantly at his side, has successfully led his ducklings through rain, shine, potholes, border crossings, road blocks, invisible hotels, disappearing roads, dirt tracks, floods and ferries, from Hanoi to Singapore, just as he said he would. If you wanted to travel between those two places and were a normal, sane person, this is not the route you would have chosen. But you would not have had so much fun or raised so much money.

Mr Walter, thank you for dragging us along. We love you, and it has been an honour and a privilege to share your bubble of sublime chaos for two months. Not to mention quite literally a major pain in the arse

Thank you Al and team, it was a wonderful experience and I couldn't've done it without you 'ol! It was a brilliant piece of team work, and we did a great job! Thanks to everyone, and especially Al for writing the blog till deep into each night!

Thanks Walter for making history, thanks to the team for letting me be a part of it; it truly was a great time.
Thanks Al for recording it with such humor and humility.
What's next?!!!
Jim

So I’m sitting in the departure lounge at Changi airport Singapore yesterday watching the Asia News on the big screens, interested because I’ve been in a partial vacuum for eight weeks. A promo for the morning show appears featuring a 5000 km cycling journey to promote CF awareness, with several pictures of our group fading in and out. One final buzz to add to the innumerable highs of the past two months. Thanks gang, thanks Walter. Regards, Mark.

And thanks for the blog, Al. Very cool.