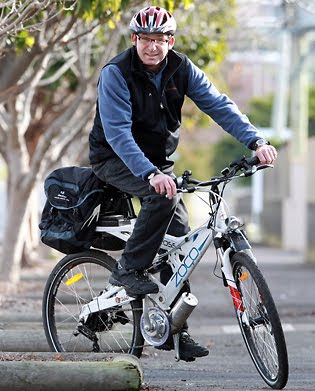 ADVENTURER Walter van Praag has dedicated most of his life to staying healthy. Next month, Mr van Praag, who has cystic fibrosis, leaves Tasmania to cycle 5000km from Vietnam to Singapore, raising awareness and funds for CF and organ donation.

Five years ago, Mr van Praag cycled from Paris to Instanbul on 38 per cent lung function, thinking it might be his last big adventure. Not only was he named one of the top 20 faces of Australian cycling by Australian Cyclist magazine but he followed it up two years ago by climbing Borneo's Mt Kinabalu for his 45th birthday. From Turners Beach, near Devonport,

Mr van Praag and his companions will ride four Zoco electric bicycles. The 47-year-old defies medical odds every time he takes to the road. "I'm on the wrong end of the bell curve the average life expectancy is 37," Mr van Praag said. He has diabetes, common in CF, calling it an "age medallion" because he has lived long enough to get it: "A lot of people with cystic fibrosis like to concentrate on career and family, but I've dedicated my life to being healthy and out and about, avoiding pollution and avoiding hospitals. "People tend to crawl into bed and stay there, but it's important to walk or cycle and cough to clear my lungs."

Mr van Praag, originally from Holland, will ride with a rotating group of friends on the trip, which is being done under the banner Coughing4CF, the name he uses for his adventures. Each day, he needs to cover 100km, with the battery used sparingly, and will also have to swallow huge amounts of pills, use a nebuliser and inject insulin.

Through the ride, an Everyday Hero website will allow sponsorship to benefit the CF Association of Australia.