Phages in The Ukraine city of Lviv 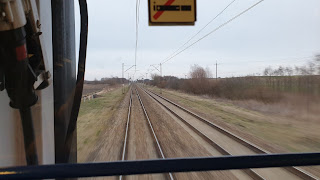 I jumped on the train to Lviv in the Ukraine. Three hours to the border, changed to a wide track train, got checked for flu symptoms by soldiers and arrived about 730pm Friday night

On my way into town I enthusiastically stopped at a few pharmacies and discovered language is a major barrier here. 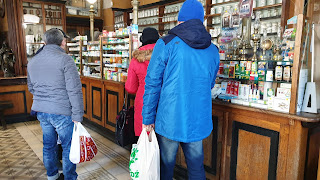 Long story short, I visited about 5 pharmacies who all sold phages and phage derived lysate products. Still it seems to me it is not the most common cold, cough and diarrhoea medicine that I was expecting it to be. Perhaps this is because antibiotics for the average person would still work a lot more effectively than a commercial phage preparation. Primarily because phages need to be individually matched to infections, and a random cocktail will only work for the most common infections.

I found one person who spoke good English and he explained he gets the phage based medications and sometimes they work in a matter of days, but when they don't he goes to the doctor for antibiotics etc. This indicates that without local  phage clinics and efficient specimen pathology services individualised phage treatment (Magistral Preparations) would be difficult and hence antibiotics would be more suitable.

To really understand the situation I found the Pharmacy Museum here but the old women with their painted hair were seriously unfriendly and borderline hostile. Not interested to say or do anything. Being a functional pharmacy as well they were not interested in helping me and just took my money and pushed me  into the museum. I even asked if I could see a doctor somewhere but despite understanding the word doctor just walked away from me.

In any case, I spoke to people, bought various phage preparations, really enjoyed the overnight experience. I will read the medicine inserts and labels carefully when I'm back in Poland.

As it happened I (discreetly) coughed a fair amount of blood again, just after entering Poland whilst changing trains. Phage treatment cannot come fast enough for me. I think I need to get us to Belgium sooner rather than later and see a doctor.

The only thing I took here other than my usual meds was a nasal eucalyptus spray, which I doubt caused the bleed. I've also been doing enough walking and nebs, eating healthy and I must say I feel great with little coughing even.

After the Hemoptysis episode I took the first class train back to Krakow to avoid the crowd. Fortunately it was only a fraction more expensive. I think the reason it is not popular is because the first class wagon is old fashioned and has no power points at the seats!