Getting tested for COVID-19 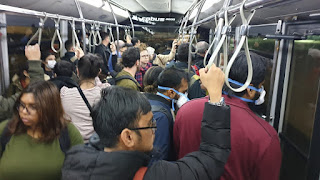 Well, it's been a long time since my last update. Last I left you we were in Belgium when we decided the Coronavirus was putting an end to our bacteriophage efforts.

I was no longer coughing blood since I started taking the Ukrainian over the counter phages which had pseudomonas aeruginosa as one of their targeted bacteria.

We went to the Netherlands where we stayed with friends, and when the threat became too big we eventually booked an expensive hotel in my hometown of Noordwijk, seaside area of the Netherlands. We felt safe and secure for 3 nights and then decided to drive to the middle of Holland where there are lots of heaths and forests and we had another two nights in nature away from crowds before driving to Amsterdam for the final two nights prior to our flight home. In Amsterdam, we had a superb Hotel booked and paid for by sympathetic friends (!) where they served room service breakfast as by now cafes and restaurants had closed. Cindy and I rented bicycles and rode around a pretty empty Amsterdam, visiting many museums in quick succession - it's amazing how quickly you can ride past a museum if you don't go inside to look... Cindy managed to twist her ankle as she rushed off the road to make way for a police car with sirens. This was in front of the Torture Museum of all places.

Before our flight, we found the Amsterdam Bos and the Olympic rowing course where we walked for many kilometres in preparation for the long flight home.

Amsterdam airport, Schiphol, was very empty and the security still had to frisk me at very close & personal range not wearing a mask either. Pretty outraged I checked with his supervisor who said he was following protocol and that she would be doing the same in 15 minutes. I felt seriously at risk because he would have surely been infected in the past few days and could now be passing it on to anybody he was frisking like he frisked me. Apart from that, it wasn't too bad in Amsterdam and we got onto an empty flight to Abu Dhabi.

In Abu Dhabi, we went to a lounge to which one could pay for access and there I did my nebulising. The hundred-dollar access fee had scared most people and it was also in a disused terminal of the airport hence we felt very safe there. The $100 fee to get in included the towel for the shower a toothbrush a terrible razor and a very very limited choice of food and drinks, in fact not even a choice really - see below image. But we were safe. 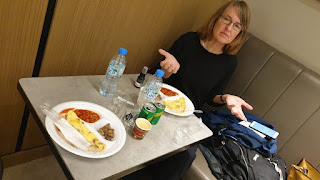 The Abu Dhabi Sydney flight was jam-packed full with Australians returning, and arrived in Sydney at 6 in the morning we all got our flyer about 14-day self-isolation as we exited the plane. But clearly, self-isolation was not in effect until you actually got home. Forget about social distancing when exiting a crowded plane or going through customs it seems. Once at the domestic terminals where it was fairly quiet we faced cancelled and delayed flights as we made our way from Sydney to Melbourne to Devonport, arriving about 10 hours later. People in the queues were not keeping distance at all, staff and crew were also acting just as per normal as if there was no virus at all. Even in Devonport when a staff member asked if anybody had been overseas those half a dozen people were crowded around a small table filling in forms about their 14-day self-isolation...

Cindy and I had a car waiting for us and we drove to James Street where Ree had prepared the home for us and stocked it full of food. Ree had arranged with friends to stay at a beach house far away for the next 14 days to give Cindy and me a self-isolation place. Normally I live in a house with two or 3 others so this was great.

We arrived on Friday night and on Monday morning the mail brought me phage medicine from a Georgia contact.

Monday Cindy was also getting signs of a migraine, vomiting slight cough slight temperature and we eventually called the hotline who deemed us as not testable yet. Fortunately, within 24 hours we got a call to say that my cystic fibrosis was a deciding factor to get us tested. So on Wednesday, we drove out to the hospital with permission of the hotline.

Donning clean new clothing a fresh mask and plastic gloves and equipped with an antibacterial spray we headed outside the house. The testing clinic was pretty much empty and we were helped in a friendly and professional manner. Swabs were taken and we will be notified in a day or two they said.

In the meantime, I started taking the Georgian over the counter phage against pseudomonas aeruginosa and tonight I'm starting with an inhaled colistimethate sodium nebulizer antibiotic treatment as well. Wouldn't it be great if my lung function was better after 14 days of self-isolation with these new phage medications! The walks around the house certainly wouldn't have been enough to qualify as exercise, but it's the least I can do.

And just as an interesting note, on the flight between Sydney and Melbourne was a young family from overseas where the woman was crying in tears telling the crew to keep their distance from her. She was screaming and saying nobody is paying attention to the safe space requirements, not even the crew. The hostess was trying to offer her tea and asking her to calm down as she was screaming 'get away from me, step back'..., which the hostess was just not understanding until the husband sternly said please leave her alone. This is exactly how I felt for 12 hours, and I can assure you I am not fussy about a few inches here or there, and still regularly touch and scratch my face accidentally. If we caught the virus we caught it between Amsterdam and Devonport.

Fingers crossed we are all safe and I'll get back to you all when we get the results back. 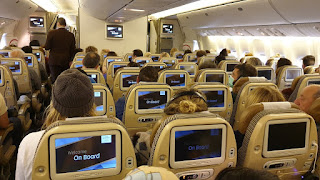 I had a similar experience flying from Bangkok to Amsterdam a few days ago. At the airport in Bangkok, there were lots of Asians in full protective gear, dressed as if an anthrax attack was imminent. At the check-in counter for the flight to Amsterdam people looked as if they came straight from the beach and everyone closely packed together. On the plane, people were behaving as usual. About half of the people had masks, but when talking to each other in the aisle, they lowered it a little, spitting billions of virus particles into each other's faces with every word they uttered.

People here in Holland seem to have gotten the message by now. I was impressed yesterday to see how the floor at the bakery was divided into squares where people were supposed to stand and how the few people outside are keeping enough distance from each other.