Phages coming to the Surface... at a sewerage near you!

Great to see the world is waking up to Bacteriophage Therapy! 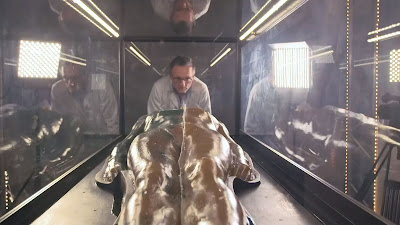 Just last week on SBS in Australia they showed a BBC program Michael Mosley versus The Superbugs. It explained the problem we have with Antibiotic Resistant bacteria infecting and killing us and how expensive and difficult it is to find new antibiotics. If you are in Australia have a look, and fast forward to minute 50 to get to the phage bit. Watch:  www.sbs.com.au

But really, the best coverage on Phages was on this fantastic documentary which,.... is in Dutch. Just got a call from a friend in Holland to urge me to look into Phage therapy! Well, yeah!
Watch: Dokters van Morgen

Here is some info from the Dokters van Morgen doco;

Dutch people are going to Georgia (former USSR), Poland and Belgium for Phage treatment because it is not available in Holland, despite research done at Dutch academic institutions. A recent petition in Holland presented 40,000 signatures to the Dutch parliament demanding Phage Therapy to be allowed! In the USA the FDA allows phage therapy to be used in case by case situations but usually only in end-of-life situations. Those cases are well documented and mostly have positive outcomes. In Georgia, phage therapy goes back 100+ years and in Poland 70+ years, all have detailed studies, books, papers and even recent peer review trials, none of which are accepted by the Dutch RIVM (National Institute for Public Health and the Environment).

The program explains how phage therapy in the West was dropped in favour of Antibiotics because phage therapy only targeted one bacteria at a time whereas Antibiotics offered one pill for all, and also assumes phage therapy is not explored because pharmaceutical companies are the ones that invest the 10s of millions of dollars required to do the clinical trials and get new medicine approved, but not for medicine they will not make a profit on. No one else has that sort of money to run the official trials needed to approve it. Besides, phages are abundant in this world and often the labs that study and isolate them just retrieve them from their local sewage system, their local rivers or any other bacteria-rich environments. Obviously not something a well respecting politician likes to hear.

In Poland and Georgia where phages are widely accepted as standard medicine and available by prescription for common infections, as normal as it is to get antibiotics. Commercial phage cocktails are sold in pharmacies for little money!

The documentary follows dutch patients to The Institute of Immunology and Experimental Therapy PAS in Wroclaw, in Poland, and to the

Andre Gorsky from the Polish Evergreen Phage Lab said they operate their lab in Poland, in the European Union (EU), with EU support, using EU approved protocols as outlined by the European Medicines Agency (EMA) is a decentralised agency of the European Union (EU) responsible for the scientific evaluation, supervision and safety monitoring of medicines in the EU, and cannot believe other countries do not recognise their decades of research, their peer-reviewed paper or  seem to accept that phage therapy saves lives. Andre says the EMA clearly allows phage therapy to be used in the EU where it is proven that other medicine has failed.

Back in the USA the UC San Diego Center for Innovative Phage Applications and Therapeutics, touted as the first phage therapy centre in North America, bringing innovative research and clinical practice to the field of medicine. There they treat with phage therapy on a case by case basis FDA approval process. Apparently, the phages used there come from a lab in Belgium, Europe!

Belgium; the Queen Astrid Military Hospital in Brussels and www.p-h-a-g-e.org have been instrumental in getting approval for phage therapy in Belgium, This means that as of last year a physician in Belgium can now prescribe phages to treat a patient, and a pharmacist can receive this prescription and prepare a tailor-made phage cocktail for that patient!


So,... maybe I should go to Belgium, I know the beer is good there and they have an excellent bicycle path network so I feel at home. And I should find some Cystic Fibrosis patients in Belgium and see how they go!!!

NOW SHARE THE BELOW LINK TO HELP ME SPREAD THE PHAGE MESSAGE IN MY QUEST TO BEAT THE BUGS;