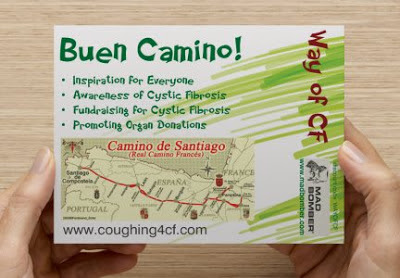 \
Our current biggest Sponsor is the Mad Bomber, hat and outerwear manufacturer based in Virginia. This batch of postcards, featuring the Mad Bomber logo and their special offer to supporters will be used for promotion of The Way of CF for now.

Do you know of a company that likes to feature on our postcard for the next batch? The biggest sponsors in the end will be referred to as our Major Sponsor on the walk, and their promotional message will be featured on the thousands of postcards we will hand out en-route. Those postcards will be mailed to pilgrims/hikers families and friends all over the world who have a connection with Cystic Fibrosis! A fantastic opportunity for an international organisation to show their support for Cystic Fibrosis and Organ Donation!

If you like to get a 15% discount on Mad Bomber hats go to www.madbomber.com and use the promo code WAYOFCF.